It is the case with injustice that it always spawns resistance. Patriarchy and women’s oppression have been around for millennia. So has been the struggle against it.

All too often, it couldn’t take the form of an open rebellion. It revolved around a muted daily resistance, based in complicity, support and sorority networks. Or maybe it was carried out by trailblazers that defied conventions. In modern societies, for the last couple of centuries, feminisms have provided an ideological, political and philosophical framework for that struggle, placing it on sounder foundations. These ideas have shaped a movement that now spans across the globe and which allows the actions of some to be the inspiration of many. Feminisms and women’s struggles are now truly international.

From this point of view, it may be unfair to pinpoint any specific time or event in this long road of resistance. However, we’ve got the feeling that 2018 was a momentous year for women worldwide.

In Argentina, as in many places in Latin America, abortion rights are incredibly restricted. They are limited to the gravest cases of rape or risk of death to the mother. This, of course, forces many women to have unsafe abortions in underground, unsanitary clinics, or even at home, putting their lives at risk. Compounding things further, machismo, sexual violence and discrimination are rife in the continent. In Argentina, this took the form during 2017 and 2018 of high-profile horrific cases of abduction and murder and a pervasive culture of femicide. But this time they were met with an organised response. Thousands upon thousands took to the streets to denounce these crimes and demand a reform to abortion laws. A green wave, marea verde, swept over the country, to demand an end to femicides, the reform of abortion laws, and equality and respect for women, homosexuals and transgendered people. Though some of these changes are cultural and may take generations to come about, the end to the abortion ban was nearly achieved, as our comrades from FORA explain in their piece. The mobilisations of 2018 in Argentina are likely to be a milestone for women’s struggles in the country and, we hope, provide a springboard from which all its demands can be achieved.

Likewise, in Ireland, traditionally a country where the catholic church has hold sway over the public debate, things are moving forward. Here, an abortion ban was included in the constitution and similarly, severely curtailed this right giving raise to similar high-profile cases that sparked a nation-wide debate. Over the last years, a growing tide of feminist mobilisation demanded a change to the constitution. To be legally binding, this could only be done through a referendum. The vote took place in 2018 and, despite intense pressure from conservative groups, the catholic church, American evangelists and the like, the support for women’s rights won by a landslide. This places a mandate on the current government to now pass legislation regulating this right. Our Irish comrades from IWW-WISERA were part a broad coalition of feminist groups, unions and grass-roots organisations that achieved this historic success. Once again, mobilisation proved to be an excellent tool to place women’s issues in the public spotlight and ultimately, achieve lasting improvements.

A similar social and cultural earthquake took place in the US with the emergence of the #Metoo movement. This initiative highlighted the pervasive nature of sexual harassment and violence against women. The highest profile cases got a lot of media coverage, but the campaign went a long way to prove that this is, sadly, a common occurrence for many women throughout their life. Focusing on the most prominent examples, as the media have done, could give the misleading impression that this is a matter of men in positions of power taking advantage of this situation to harass, abuse and rape. But the truth is that patriarchy, as a systemic element of society, places ALL men in a position of power with respect to women. This is not a problem limited to posh board rooms or fancy film studios. It is an all too common experience for women to be harassed by workmates, family members, neighbours or just plain strangers. Any initiative that empowers them to denounce this situation or to talk about it without feeling that they’re being judged, but supported, can only be welcomed. Of course, as the problem is systemic, so must be the solution: getting rid of patriarchy altogether. 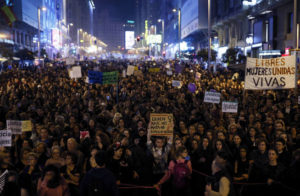 Probably, one of the most spectacular examples of this took place in Spain, were millions took to the streets in March 8 2018 as part of the first feminist general strike in the country’s history. The images of the massive demos and rallies of the day made global headlines and are now enshrined as part of the history and collective memory of the feminist movement in the country. Though there are many aspects to consider in this case, two are noteworthy. Firstly, the proposal for a general strike initiated in the feminist movement, but, legally, it could only be registered by the unions. Organisations like CNT did all the groundwork to provide the necessary legal cover for those going on strike for the day, which is not an easy task in itself. The fact that CNT did it successfully is proof of how much this organisation has developed, as a tool for the working class, over the last years. Also, the success of the day goes a long way to show what the synergy between revolutionary unions and social movements can achieve, in terms of radically transforming society. Secondly, once again, struggle and mobilisations are shown to be excellent ways to pursue a social change. In the days before the strike, just by calling it, women’s issues became the sticking point of the national debate, where they have remained since, in a way that a million political or institutional statements could not have achieved.

In a very different context, 2018 saw the collapse of the misogynist rule of DAESH over large parts of the Middles East. Particularly in Northern and Eastern Syria, the brave men and women from the forces defending Democratic Confederalism struck a long series of defeats over the misogynist fundamentalists. Of course, if there’s a case when picking a date or a year is unfair, it must be this. For many years, the comrades have been in the frontline of the fight for women and humanity, as a whole, against plain fascism and pure evil. Beginning with the defence of Kobane in 2015, the advance on Raqqa in 2017, the rounding up of the fascist resistance all through 2018, up to its soon complete defeat in these days of 2019, we have seen our brave comrades inch forward to success, at the cost of much blood and many fallen, men and women, that sacrificed their lives in the pursuit of freedom for all of humanity. March 8 is a day of homage to them too, as they stand firm in what is truly the forward frontline of feminism and women’s struggles.

Needless to say, these are but a few examples of some successful struggles that may inspire other women across the globe to take action, assert their rights and fight patriarchy. Many of these struggles go unreported and they may feel like they go unnoticed or that they do not have any effect. This is never the case. When the fight is global, every initiative, tiny as it may seem at the time, becomes a piece of a larger puzzle, a brick in the building of a broader social and cultural change. AS March 8 2019 comes closer, ICL, as an international, want to encourage all women across the globe to assert their rights and fight the pervasive monster of patriarchy in whatever shape it can take to them and by whatever means are available to them. Sisters, you are never alone! You are part of a global resistance that spawns every time and everywhere. Let’s make 2019 a successful follow up to this herstory. There’s still much to achieve, there’s so much more we will win. As our Turkish comrades say, hold on to your struggle, so we will!

FORA · Why the feminist strike?

[ICL] 8M – Over the borders and across the generations