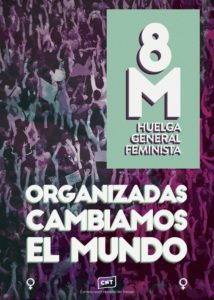 On March 8, the National Confederation of Labor (CNT) will convene a feminist general strike of 24 hours in all industries, in response to the call from the feminist movement, and in line with the CNT’s own principles. This call covers the entire territory of Spain, so that anyone in any part of Spain will be legally protected for supporting the strike.

Almost a year after the historic strike of March 8, 2018, that mobilized millions of people in defense of women’s rights, the reasons for that strike remain are still present. Day after day, women continue to face a capitalist and patriarchal society that denies them the most basic right to non-discrimination. The violence that is exerted on women – at home, in the street, or at work – must be attacked and annulled by our entire society, so that we can aspire to live in a more just and egalitarian environment.

As a union, the CNT fights every day against the discrimination which women suffer at work simply for being women. Neither the current legislation nor the courts protect the right of women to work on equal terms with their male colleagues. Abusive agreements, lack of effective tools to guarantee the same salary for performances of equal value, unrecognized illnesses characteristic of work in feminized sectors, harassment, and sexual abuse are just some examples of the conditions that women face in their work environment.
Faced with this reality, the CNT is calling the entire working class to a feminist general strike on March 8 to demand the elimination of the wage gap (both direct and indirect). the elimination of obstacles in access to work and in promotion (sticky floor and glass ceiling), measures that facilitate the reconciliation of work and family life leading to co-responsibility, elimination of the pension reform which will allow only 23% of women to retire at 65, as well as the end of all discrimination in domestic labor.

Just like last year, the CNT is supporting the feminist movement and, along with other social groups and organizations, will continue working to achieve a true political and social change where reproductive labor is recognized, valued and shared.

Because all oppression will find the CNT in front, on March 8 we will be on the streets to unite our strength and contribute to the success of the call.

Permanent Secretariat of the Confederal Committee

[CNT] Working women are overwhelmed. And we are fed up

CNT’s statement against the war in Ukraine and against militarism

Call for a general strike in all industries March 8, 2019

Successful fundraising to support comrades at FGWM in Myanmar