[Spain] Militant as always stronger than ever

CNT calls to resist all forms of patriarchy, in the streets and in the workplace

On this 8M, International Working Women’s Day, the National Confederation of Labour (CNT) calls for all forces to be joined around the fight against fascism. This weapon of repression, inequality and hatred is gaining strength in institutions and in the public discourse. Feminism will be the spearhead to put an end to it. CNT stands for a class and radical feminism, based on diversity and gender inclusiveness. Only this will breach the walls of uniformity that capitalism, patriarchy and fascism try to impose.

Domestic workers, migrants, trans, women of colour, pensioners, workers, qualified or not … all women must rally to this struggle. We’re fighting for everyone’s rights, but also for a better society. Feminism is a bulwark against fascism. It has always been so but, today more than ever, that’s something worth recalling. That doesn’t mean we’ll turn a deaf hear to debates about priorities among movements, about our differences or what sets us apart. But we must be clear about one thing: we have a common enemy. Those who want women silenced, with precarious working conditions, isolated and disenfranchised.

That’s why this 8M, as in previous years, CNT will be taking to the streets to demand workplace equality and the repeal of labour reforms, particularly harmful to working women. We will be denouncing exploitation and violation of labour rights, especially prevalent in mainly female economic sectors. We will be demanding that health problems common in these sectors are recognised as occupational diseases, something that is not happening now, as they affect mainly women. Also, that domestic service is included in the same social security system as any other job, not a separate one. We will be denouncing the huge unemployment rates of trans persons, the defencelessness of our migrant comrades, brought about by the Immigration Law, and the stigmatisation and discrimination suffered by persons of colour in their labour and social interactions. We will be rejecting the lies of capitalist feminism, a hallmark of the largest companies in the country, and supporting instead fair retirement pensions for working women both in the productive and reproductive economies. We will stand for all those who have no option but to eek out a living in the informal economy. 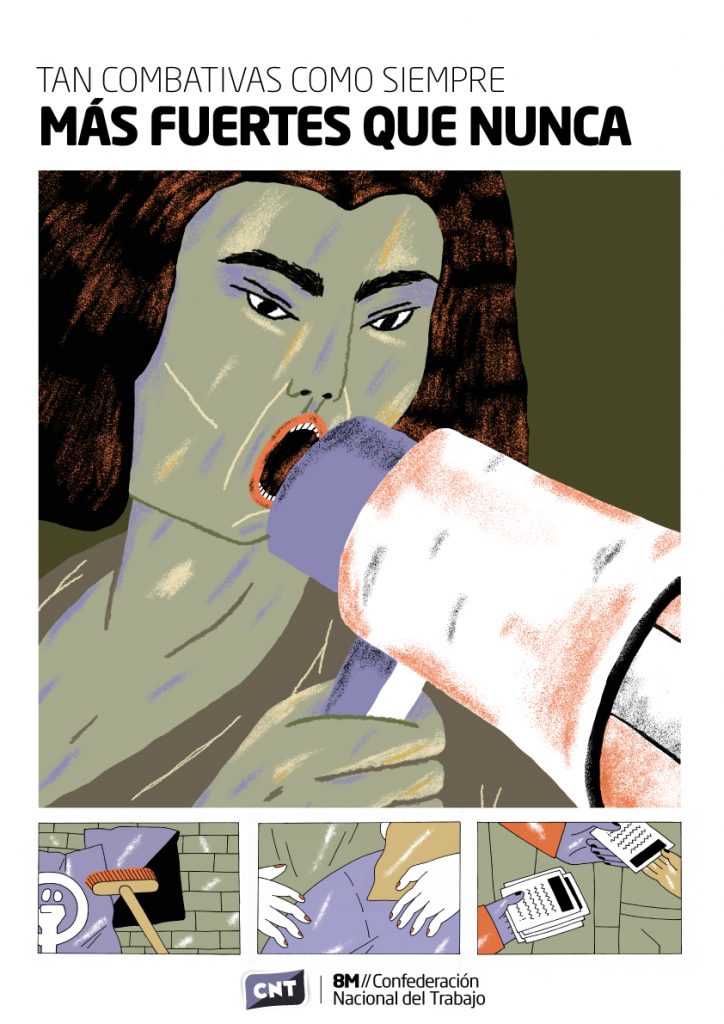 We will continue in the first line of action and fighting hand in hand with the rest of the feminist movement, so reproductive work or motherhood are not burdens on women. We believe that extending maternity and paternity leave is not enough to centre economy around life, instead of the market. Therefore, in order to build a society with values, we demand that the market is adapted to life. We want real and effective support for those looking after children, relatives or the disabled. Our male comrades should be equally responsible for reproductive work and there should be more women acting as representatives, to gain visibility, in social and militant organisations, such as unions. Including our own, to begin with.

We want to be the last straw in breaking sexist violence. From our workplaces, at home and in the streets, we stand against harassment of any kind and against any threat to the human rights of women, who make up more than half of the population. Something that CNT, as an anarcho-syndicalist, working class, anti-militarist, anti-fascist and feminist organisation, is committed to.

[ICL] 8M – Over the borders and across the generations

[Germany] Let's give patriarchy and capitalism the middle finger!

[ICL] 8M - Over the borders and across the generations